In the last several years, we have served hundreds of students who were at risk of dropping out.
In 2015 Teens Act was recognized as a Bright Spot by the White House Initiative on Education Excellence for Hispanics for the work we do in helping students in Provo! This is an incredible honor for our program!
Teens Act works to improve graduation rates (In Utah 2020-88.2%) and to address the dropout challenge facing our students (In 2020-10%) and the resulting outcomes for students and their families. Graduation and dropout rates for subgroups are an important part of these measures. For instance those who were economically disadvantaged graduated at lower rates than "all students" (In 2020-78.4%) and dropped out at higher rates (In 2020-18.5%) and those identified as Hispanic/Latino graduated at lower rates than "all students" (In 2020-80.2%) and dropped out at higher rates (In 2020-17.8%). (Utah 2020 Graduation Rates)
Throughout the US each year, approximately 1.3 million students fail to graduate from high school, more than half of whom are from minority groups. This means that two students dropout of high school every minute. Not only does this create a huge reduction in earning power for these students, but it creates many problems for those students, their families and society as a whole. Students who drop out are more likely to live in poverty and have a lower quality of life. A study out of Northeastern University found that each high school dropout costs taxpayers $292,000 through the course of their lives. According to their calculations that equals nearly $957 BILLION a year. (Graduation Alliance 2014 report referenced). Utah also faces this educational challenge, and that is where Teens Act steps in. We are helping to increase the number of students who graduate high school and decrease the number who drop out through an educational “triple focus”: 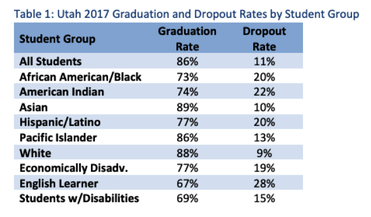 Utah experiences significant educational challenges. The overall Utah statewide single-year dropout rate for ninth to twelfth-grade students was 11% in SY 2017.
In Utah the rate of graduation has improved, and the dropout rate has decreased each school year since 2012. However as can be seen in this graph there is still a large percentage of students who are failing to graduate, and a significant percent who are dropping out of school.

Averages from two high schools in 2018-19 where our primary work was to help students complete their school work and as a result pass their classes we found these results:
Before TA class        Pass Rate   61.63%
Following TA class   Pass Rate   84.45%
Average change-Increase in passing grades 22.82% (A-D)

Students comments regarding the class included these:
“I recommend this class to people that think they won’t be successful in life and those who want a second chance, because that is what it has given me.
Thank you."

“I loved my students success class because it was one of the only classes where the teachers actually made me feel like they cared about me and my education. It not only helped me with school, but in my personal life as well! This class, including the teachers, always had hope for me. I’ll always be grateful for the opportunity I had to be in that class.”
Of our eligible students in 2015-16, 91 percent achieved on-time graduation. Of graduated students, 43 percent of students that we were able to contact have moved on to higher education.
​
"I definitely feel differently about my future since I've been in the class. [The mentors] just showed that they’re there for me and they push me ... They help you with school stuff, help you to go to classes, do your work; it helps me a lot"
​- Michael, Teens Act student
In 2014-2015, we served approximately 90 underserved students and their parents at both Provo and Independence High Schools (including the entire sophomore class at Independence), implementing all three aspects of our College Preparation Course: the Student Success Class, Parent Support Program, and After School Tutoring.

67% of our students were ethnic minorities and of that, 84% were Hispanic. 73% of our students were on the free or reduced lunch program. Many of our students were from low-income families with no college education or were from families that are new to the United States and our education system.
At Independence High student Kenny Whimpey was able to attend the National Academy of Future Physicians at Harvard.
On July 15, 2015; Teens Act collaborated with Timpanogos Elementary’s Parent Program to host a Parent’s Night Tour at UVU. There were 15 families in attendance to make it a huge success. Of those who attended, 12 of the 15 were hispanic. Most of the parents had not attended college themselves, the tour provided a way for them to get involved early in their child’s education. This event was able to get parents and students more excited and informed about college preparation for the future.
During the 2013-2014 school year, Teens Act worked in Provo High School, Independence High School and Jordan High School. Unlike previous years, we started an approved elective Student Success Class that is taken during the day in all three high schools.

Our class emphasized the importance of academics and college and taught students how to develop life skills. Each student was paired with a college mentor who was present in the class each day and help the student set goals. Guest speakers were an integral part of our curriculum, motivating students to do their very best.
​
In the Winter 2013 we made the decision to keep our program local and work with the students at Provo and Independence High. We added over 70 at-risk students, serving a total of 91 students, 81% of students were minority students, and we achieved a 90% attendance rate. At the end of the year 86% of the senior students graduated from high school, while some of them are still in high school. We also offered After School Tutoring and the Parent Support Program throughout the year.